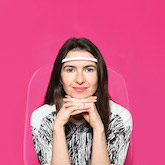 Ariel Garten is a neuroscientist, innovator, mother, and entrepreneur whose driving purpose is to empower and help others overcome mental obstacles in order to live healthy, happy lives and reach their maximum potential. She is the Founder of InteraXon, the makers of Muse: the brain sensing headband. Muse is the award-winning wearable technology that assists and trains meditation and mindfulness. You can find her 2011 TED talk where she explains a bit about the technology.

Before founding InteraXon, Ariel was not only trained as a neuroscientist and psychotherapist, but also started her own international clothing line while she worked in labs researching Parkinson’s disease and hippocampal neurogenesis. Her creativity and entrepreneurial head combined with her fascination with the brain lead her to join forces with two likeminded friends, the later co-founders of InteraXon. Together they founded a Silicon Valley backed startup that allowed people to control computers with their minds, the technology that sparked the creation of Muse. Her team’s technology has been featured in over 1000 media pieces, as well as was the feature showcase at the Vancouver 2010 Olympics, an installation that allowed over7,000 people control the lights on the CN tower, Canadian parliament buildings, and Niagara Falls with their brains from across the country.

These days, Ariel can be found at home playing with her 2 year old or on stage across the world speaking about happiness, meditation, understanding mental health, or telling her own innovation story, consistently giving her audiences the tools they need to help them become their best selves.