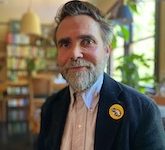 Ian Spencer, M.A. writes: I am a Los Angeles based psychotherapist working in Echo Park. I did my undergraduate studies at Bennington College and received a BA in Literature. I completed my graduate studies at Pacifica Graduate Institute in Santa Barbara focusing on Depth Psychology. I am a LMFT with a MA in Counseling Psychology. I did my clinical training and internship downtown at the Midnight Mission working with chronically un-housed individuals with dual-diagnosis’ and at the Children’s Institute in the Compton/Watts office focusing on home visits with families and school age children. Between undergraduate and graduate I worked as a film editor for two decades. I was present and active during the birth of reality TV and watched it evolve into the multi headed beast it is today – broadcast, streaming, YouTube, Facebook, Instagram, Snapchat and Tik-Tok. As an editor I had a unique window into this new form of storytelling where the stars were not professionals who only pretended to be someone else, but amateurs who became stars for just being themselves. Even before I became interested in changing my career I was aware that this new medium represented a psychological shift in the way the culture was understanding itself and reflecting itself. I knew we weren’t making documentaries, but we weren’t making fictions either. In addition it was clear that the effects of the fame was different for reality TV stars than professional actors – a reality TV star was someone who put their real emotional states on the screen for entertainment – emotional gladiators of sorts. The harder they battle the more they are loved or hated, often to devastating psychological consequence. It was after my training as a psychotherapist that I began to realize that reality TV held the shadow material for our culture, and as such it was no wonder that those who lived in shadow material paid a heavy price. It was this population that I became interested in treating.

Social media and other platforms have grown up interwoven with reality TV. Now anyone with an internet connection has the possibility of becoming internet famous. One viral moment on Instagram, YouTube or Twitter can change the course of a life. There are hundreds of thousands of people across the globe who would love nothing more than to have the spotlight of the world shown on them, yet most are unprepared for the true cost of this kind of attention. Celebrity brings a flood of projections upon the star. These projections are powerful and often succeed in destroying the stability of the receiver’s Psyche – Jim Morrison, Jimi Hendrix, Janis Joplin, Elizabeth Taylor, Michael Jackson, Lindsay Lohan, Brittany Spears, to name just a few. In addition single projections can be fatal such as the murder of John Lennon. The smartphone essentially takes projections from fans and creates a lazer-beam that focuses them directly into the user’s eyes. If you are an Influencer or otherwise a ‘star’ of an internet platform you will be exposed to many of the same challenges that Reality TV stars are exposed to.

The healing community is lagging behind in its understanding of the vulnerability social platforms present to our psyche. Most are focused on defending our social norms against smart phones – a battle I compare to past generations who burned comic books or Jazz records. This defensive attitude is reasonable considering that the digital revolution is threatening our understanding of reality by disrupted everything we thought was solid – our workplace, our parenting, our privacy, our leisure activities, our romance, even our therapy services. Our human endeavors are all strategies evolved over the millennia to contain the energy of our consciousness – work, play, religion, intimacy and art are the vessles that define us and ground our reality. Each time a new hill is crested there is a psychic dilemma that must be overcome – I am reminded of the opening scene of Stanley Kubrick’s 2001 Space Odyssey when the early humans are startled to find the perfect black obelisk and the psychotic episode it inspires in them. Reality TV and the sister tech platforms of our new social mirror are just such a black obelisk.

His blog can be found at https://therealitytvtherapist.com/