WHO: Anyone who is interested in Jung's , Robert . Facilitators: Janet Fortess and Chris Doggett 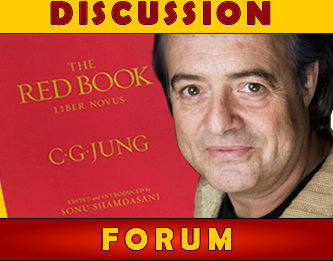 >>>This Special Study Group starts January 19th, 2013. It is an open written discussion forum based on following the pre-recorded 40-hour audio course* with Robert available from Jung Platform.

This is a central place to which you can come and post questions or comments about the designated module you listened to for the 2-week period and interact with others who are doing the same thing. As such, there is no set "time" it occurs, but rather is ongoing and you can post or respond at your convenience. Janet Fortess and Chris Doggett, students and colleagues of Robert will be providing some structure and be on hand to facilitate the discussion, and Robert himself will also be checking in.

*If you're not following the audio course, you're still welcome to engage here in whatever discussion is emerging--though of course you'll likely get far more out of the process if you are able to listen to the course itself.

1. Listen to an interview with Robert on Shrink Rap Radio with host Dr. David Van Nuys to help you get to know Robert better in preparation for the course.

2. Get your copy of this in- audio course from Jung Platform. The course consists of 20 lectures of approximately 1.5 hours each which occur every two weeks. In each lecture Robert addresses a few pages from the . You can read along in your copy of the . This course comes with an 88-page study guide designed by Robert 's colleague, Jill Fischer, which contains a synopsis of each lecture. After each session, there are questions to help you test your understanding. After finishing the entire 40-week course and tests, you get a CE certificate and a Certificate of Completion from the Jung Platform University.

3/ Join the online discussion forum in the Psychology online community (HERE!) starting January 19, 2013, where everyone who follows the audio course from Jung Platform can come together and discuss each particular section. This forum will be facilitated by two professionals, Janet Fortess and Chris Doggett, who have been trained in Embodied Imagination with Robert for three years and Robert will be checking in every two weeks as well. (This forum is open to everyone, regardless of whether you follow the audio course or have the )

Robert , PsyA, is a Jungian psychoanalyst who graduated from the C.G. Jung Institute in Zurich in 1977. Since then he was been in private practice in the United States and Australia. Robert founded the Santa Barbara Healing Sanctuary and developed a method of working with dreams called Embodied Imagination. He has also written several s, including the worldwide bestseller ‘A Little Course In Dreams’.

of 13 Next
This reply was deleted.