A Transition Workshop Primer for Imprinting the New Mythology

The Artifact (for Workshop Primer)

The Myth Lab workshop is envisioned for neighborhood activists and media savor collaborators where a group of 4 – 12 participants spend 60 minutes to analyze a pre-selected Artifact and produce a new myth. New Myth # 38 was generated by Willi Paul for this Primer and is not from an actual workshop but serves as an example for workshops to come. The image for the Primer is a “living and breathing” graffiti painting from a San Francisco alley (see locator map).

A process model is included that illustrates mythic imprinting with more depth.  The goal is to integrate permaculture, transition, Nature and sustainability with the values and struggles in the New Mythology. The Myth Lab is designed as an interactive, open source and iterative experience. One goal is clear: we need to build our own messages and new myths to support our new food and governance systems.

Artifact – The Imprintable Artifact is a Nature-Human combination; examples include graffiti, a bill board, historic sculpture, and a permaculture garden, with special powers and messages to the neighborhood.

Mythos – The pattern of basic values and attitudes of a people, characteristically transmitted through myths and the arts.

New Mythology – Is a call for new Nature-based, globally integrated stories without allegiance to any classic mythologies. New Mythology incorporates new symbols, new alchemy and climate change era rituals and is built for the future.

Mythic Imprinting – Imprinting is defined as a two-way interaction with a selected Artifact that has generates synergistic meaning for both participants and the Artifact. Called “mythic imprinting” in the Myth Lab, this iterative and transmutative process is grounded in the initiation, journey and hero work from Joseph Campbell and is one way that neighborhood artifacts can help neighbors generate new songs, poems and myths.

5 Stages of the Mythic Imprinting Process: 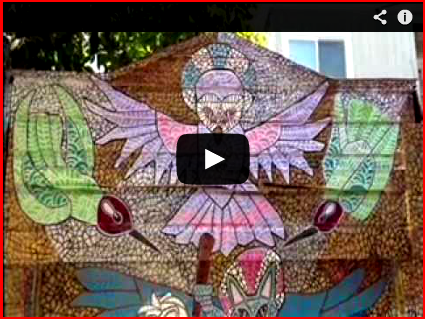 Participants transmute historic values, symbols and alchemies into updated tools for a new vision and myth

In 2042 the San Francisco Mission District is in bloom with organic cafes’, food forests and walking paths. The streets are all gone, as are the cars and trucks that once clogged Valencia and 16th and the alleys with dark smoke and pesky horns. The fear from gentrification – a community diversity killer – has now been implemented in reverse. The Transition Movement arrived as the people’s hero, killing the evil high rise developers, gated supermarkets chains and pirated water goons hiding in the High Sierra with a localized sword!

Sharing and bartering is the economic way in this land. The eco- confederacy called Cascadia. Repair and can, sprout and send.

This is a revolution of the spirit, Brother with Sister, Mother with Father. The people declared their neighborhood as a Holy Place and protected their seeds with the same vigor as the vision for the neighborhood. It was not an easy path to social and environmental justice. After the permaculture committee ripped-up the intersection at 24th and Mission Street, all hell broke loose! The last bus line was stopped here; a new bicycle path network sprang up in its place – and almost over nite.

Since everybody has a mask on, the flick-lickey flames from the backyard fire pit took on another role on this clear July nite in the Mission. Somebody twirled and yelped; a young boy jumped over the flames like a wolf with a reason. As the sparks flew away, up into the nite sky, the drummers began.

Fires always give people a weird warmth – an out of body experience, right? A power boost of shaman juice and pagan thrust. Since the soil returned from the concrete makers, magic has returned to the hearts and hands of the Mission Tribe. Compost is the best money a farmer can buy.

“Just as long as I retain my warrior status,” laughed Kat Wing.

Their masks and costumes are an attempt to relive the tribal tale of good and bad times in the hood from the beloved garage painting still preserved in the former Caledonia Alley.

The Light Network crew visits each fire dance, every seed sourcing party, keeping watchful eyes on the Children of the Sun.

Workshop participants share the New Myth with the community through oral and electronic channels, generating additional ideas and Artifacts for new rituals and songs.

One key outcome is that we design and share new artifacts that resonate from / with our neighborhoods.

We can create our own new stories, songs and myths without interference from corporate and governmental profit mandates.

The Lab can stitch together the ideals of permaculture, transition and Nature to further develop localization as the key guiding principle moving forward.

The Myth Lab is a low cost, high return process that can bring together all kinds of people: Nature lovers, poets and activists to create unforeseen synergies and messages.

As a new incubator, the “Myth Lab” can use many existing types of community artifacts to achieve creative and collaborative solutions.

Start to finish, this process is also akin to a “mapping” exercise, pointing to issues and next steps in our evolution.

1. What makes an object a good Artifact for the Myth Lab imprinting process?

2. Do you understand why mythic imprinting is a two-way (human – Artifact) experience?

3. What other sources for new myths can you list?