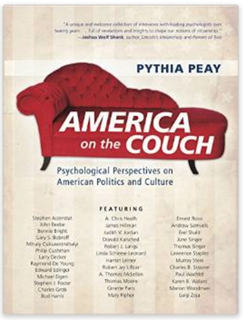 Just got my copy of a new book “America on the Couch: Psychological Perspectives on American Politics and Culture” —hot off the press from Pythia Peay. My interview with Pythia, “Hungry and Homeless, Like the Bees” starts on p. 250.

And here's a note from the Publisher, Martin Rowe of Lantern Books:

I'm the publisher of this book and its companion volume, AMERICAN ICARUS, and I'd thought I'd share a few thoughts about the book. COUCH demonstrates the wisdom of waiting, as well as dedicating oneself to a line of inquiry over many years. It contains revised and updated interviews with 37 Jungian and archetypal psychologists on different aspects of the United States of America, conducted over twenty years. Some of these psychologists—such as James Hillman and Edward Edinger—are no longer with us; some could reflect on what they said years previously and update or reexamine their theories and theses. In editing this book, I was struck by the ebb and flow of time and history—how similar and how different things were, how constant were the anxieties and pathologies that have affected Americans in two hundred years, and how hard it is within the everyday to discern the eternal verities from the momentarily striking but essentially ephemeral. For all the baffled and irritated lamentations about the addictions, betrayals, and failures of the USA to live up to its creeds, COUCH is a deeply patriotic, deeply American book—as expansive, rich, feisty, and energetic as the country it discusses.

...and more here from Martin Rowe on the story of how this book came into being...

I am honored to be part of this remarkable effort from Pythia to bring wisdom from so many sources together in one place. If you feel inclined, check it out on Amazon. It's also available on Kindle...