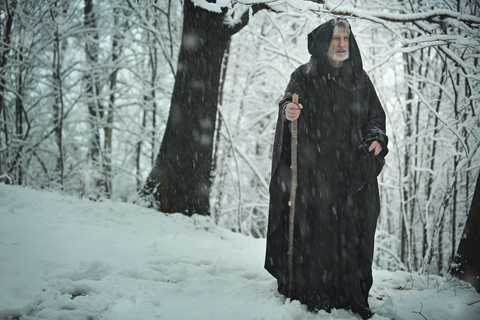 “America represents the essence of the human spirit
allowed to develop to its fullest potential.”

The Lesson of Apollo 13

Or will the United States be described by the neurosis of Election 2016?  I do understand that many of our countrymen could care less what non-Americans think of us, but how will we think about ourselves?  At this link, AeroMexico aired its opinion about building walls.

If we were to ask Dr. Carl Jung what can be done to fuse the Nation into one whole again, he might say that it is time for the “wise old man” archetype to appear in our midst and provide some answers.  By this he means psychologically that when mankind is in a state of confusion, our instincts constellate out of the collective unconscious one or more prophets, who provide enough answers to adjust our orientation to the world.  As he put it:

“…these wise men or prophets, appear in times of trouble, when mankind is in a state of confusion, when an old orientation has been lost and a new one is needed.”

This prophet could also be a wise woman.  Dr. Jung was talking about a psychic function that instinctively recognizes a time of trouble, and causes us to react instinctively in the form of the characteristics of the wise old man archetype.   That could appear in either gender, though because of the patriarchal structure of society developed over more than two thousand years, it most often manifested in men until Dr. Jung’s time.  Still, an example of a woman seized by the archetype might be St. Joan of Arc, who was captured by her enemies and burned at the stake at the age of nineteen.  Still, Joan’s counsel to the French court did change the orientation of its military leaders, and is credited for their subsequent victories.

Certainly the United States has been seized by a neurotic condition after World War II.  During the war, of course, the Nation pulled together, and even wealthy sons served honorably, including Joseph Kennedy and his brother, President John F. Kennedy.  Thereafter, though, the racial hypocrisy of American society began to split the wholeness of our country once again.  While many white people remember the 1950s as a time of exemplary peace and happiness, the time was one of awakening for black civil rights leaders.  The inevitable strains on civil discourse emerged as a genuine and ugly neurosis in the 1960s, and that along with the discord fostered by the Vietnam War, made the country seem like it was coming apart once again.

The murderous year of 1968 was the watershed for that time.  The shock of the murders of Martin Luther King, Jr., Robert F. Kennedy, the attempted murder of George Wallace and the racial changes ushered in during the Johnson Administration caused the racial neurosis to subside for many years thereafter, but it has now re-emerged in different ways.

What has now been revealed to all Americans is that the primary concern is a duality between rich white people and everyone else.  Oh yes, there are undertones of the old racial divide, but it is income inequality and the 1% harvesting of the savings of the American Middle Class, which has taken center stage.  Underpinning all of this is the fear of white Americans that they will lose their dominance in society, which provides the fuel for these divisions.

Dr. Jung advised during his lifetime that it is uncommon for a neurosis to ever be cured.  Rather, the solution is to find a new way of looking at things, which allows one to live with the internal conflicts more sensibly and responsibly.  As the new orientation takes hold, life improves for the neurotic individual, and this is no doubt true for the neurotic country as well.  Human beings are knuckleheads, who are slow to change their opinions, but gradually we learn that we can live with differences of opinion.

What can be the new orientation for Americans?  Think of all of the debates we are having, which involve a duality.  Many of these involve social issues relating to how each of us chooses to live our lives.  Perhaps we would be better served if we simply observed the Golden Rule, “Do unto others as you would have them do unto you.”

Speaking for myself, I am weary of the divisive debate emerging from Election 2016.  About two months ago my wife and I decided to simply stop following the talking heads on cable networks.  We know how we will vote, so short of a meteor hitting the Earth, we have no real need to know what other Americans think from the constant polling on a minute-by-minute basis.  There is only one poll that counts, and that is the one on Election Day.  We really don’t care two hoots about what our friends think on the many social issues, which poison the water.  As long as their opinion has no impact on our lives, why should we care?