In the world of dreams, one’s friends live forever, for they can be present at any time. In this way, I have expected the eventual visits of my close friend, who passed away this fall, in my dreams and in the recollections of him that occur to me.

With the alchemical signature of wholeness [1] of three and one, I present three dreams and a song from my content, culminating in a rejuvenation dream at the beginning of the year. In hopes of processing grief in a healthy way, I wanted to look at these experiences.

Song/Fragment: (the morning after Brian’s death) I woke up with the song, “I Can’t Fight This Feeling Anymore” by REO Speedwagon, in my head. Particularly significant was the line, “it’s time for me to fly …”

I remember now that Gary Richrath, the guitarist for REO, died five days before Brian did in September. The song fragment is relevant and connects the two people, in death. The body disconnection in death is symbolized by the line, “it’s time for me to fly …”

In the weeks that followed,

Dream: I see a scene from one of my pictures, of myself and Brian on the Avalanche Trail (descending Mt. Yale) with Mt. Princeton in the background. I am in the scene, and Brian is saying something. Startled, I wake up.

I had expected him to appear in a dream, so he did. A picture that’s on my wall came alive in the dream. Startled, I couldn’t deal with it. The Avalanche Trail (actually called a route), treacherous in the winter months, is safe enough in summer when we were there, but the reference seemed somewhat ominous. We had done that trip as a loop, which makes the reference symbolize wholeness.

In my experience of dreams, if one can’t make out words of dream characters, taking in the context of the whole scene may convey deep meaning.

Another month went by. 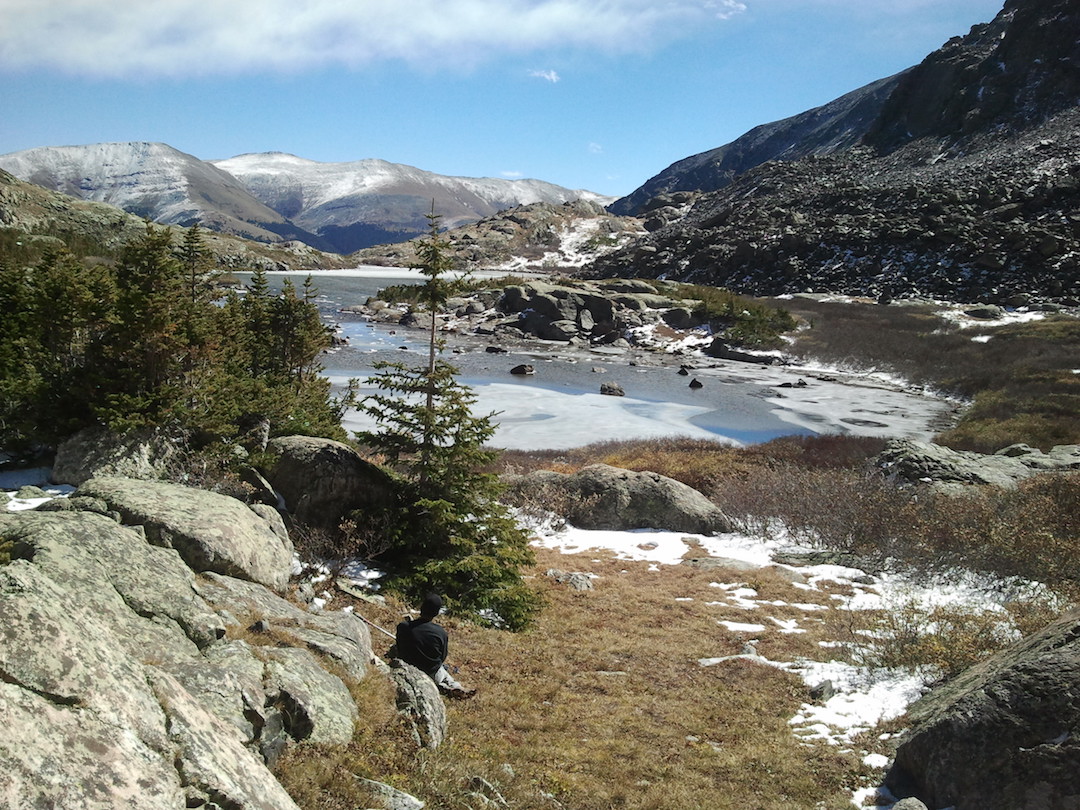 Semi-Lucid Dream: I was with Brian at the high lake at McCullough Gulch. He went over the berm to the lake, and I called him back. I said, “Brian! Come here”, and as he turned and came toward me, I said, “you’re alive! You’re in the Dreamworld!” Shaking his hand, then hugging him, I couldn’t believe he was here. He wore a tan shirt, looked healthy and had piercing blue eyes. He didn’t say anything.

Satisfied, remembering the feeling of happiness, I felt that I had made contact with my friend, rejoicing in the moment. The fairly short and lucid dream allowed me a high level of awareness, which translated to waking right after. I had seen my friend in the dreamworld and that was all that mattered to me (no participation mystique here; I understand that this content is made of projections, not to be mistaken for my friend in the literal sense). The lake is the one featured in my profile picture on the forums.

With the coming of the new year, I had the following dream.

Brian’s Rejuvenation - I look in on Brian, who is lying on his death bed. From the same position he was in when he died, his left eye is open. The eye is all black. I notice it moves. His bald head is elongated, like the Egyptian royalty who had their heads bound to be shaped like that. I go back into another room, pondering this.

Some other people are with me in the other room, when Brian walks in the door, wearing jeans and a new blue checkered shirt. I greet him, grasping both his hands. He says hello, and he walks to a couch and sits down.

He is talking with a woman who is standing in a doorway (on the west wall) which leads outside, where it is sunny. This woman is very interested in him, and I think, “he already has a girlfriend.”

There is a general air of a party atmosphere, and I am happy. I am thinking that perhaps, during this time he has been deceased, that his cancer may have receded and he has a new chance at life. Maybe he can start to do the things he stopped doing, like hiking.

There is a lot of imagery in this dream. This is January and I was to receive a portion of Brian’s ashes, for the postmodern duty of dispersing that portion on a mountain.This didn’t happen and I was resigned to forget about the possibility of the endeavor.

The Egyptian myth of Osiris [2] and a show I watched depicting the uncovering of the body of  Tutankhamun by Howard Carter were relevant to events surrounding the passing of my friend Brian, related in my previous blog, Analysis of a Dream Series [3]. In the myth, the recovery of Osiris’ body parts is vital to events in the myth; not so in my outer life but it did in the dream, as an integral part of the myth. To quote Thom Cavalli:

“If the body were not returned home, there would be no possibility for a proper funeral or any chance of resurrection.” [4]

During this time that I had been reading Joseph Campbell [5], dealing with motifs of death, resurrection (or rejuvenation) and rebirth, including the Dying God Motif [6], I had been thinking of the idea of carrying the memory of my friend into the next season as I continue to hike and climb our local mountains here in Colorado.

The Eye Motif of the completely black left eye will refer specifically to an awakening in the unconscious. The elongated head reminds me that Tutankhamun’s mother had this “mod” (result of head wrapping as a child; identity, “The Younger Lady” from tomb KV35), connecting Brian with Tutankhamun again, to continue the theme of rebirth. An elongated head, though not consciously intended by Egyptians, seems to symbolize an enlarged brain and expanded consciousness to me, from our 21st century perspective.

As I have left Brian to whatever is happening here, the scene shifts but to the same room as it was before it was a sick person’s living room. There are people here and Brian walks in, renewed. Hair, new clothes, a new man. We welcome him and he enters. Reproduced in my blog [3], Brian’s dream begins,

“… at first, with an awareness of the morning sunlight taking on a strange appearance as it shined through the slats of the blinds near his bed.”

Brian’s dream had begun with morning sunlight shining into his sleeping area. On the opposite side, where there is a window but no door in reality, a new doorway appears in my dream, containing afternoon sunlight and an anima figure, who is associated with him. I don’t know why he wouldn’t rejoin his girlfriend, which reinforces the idea that the figure exists in an image with the sun, as archetypal content. She speaks to him from the left, from the unconscious, as he is on the right, within consciousness again. Her words, not heard, are not as important as the context of her appearance.

Looking at the image, I can’t help but think the afternoon sunlight relates to the second half of my life, that his anima figure is perhaps mine, or that the anima appears as she relates to him, as she would relate to me, because after all, it is my dream. He is integrated into my reality and as our situations were similar before his illness, I move into the second half of life as I have planned, carrying Brian, or his memory, with me as I would have, had he lived. Perhaps he stands as a proxy figure for me, as a role model.

A new, numinous doorway filled with afternoon light represents a new possibility for life, a life filled with consciousness, for Brian in one perspective, for myself in another. In his acceptance, he would look forward to a new journey, a new dawn [7]. In mine, to continue the journey which I haven’t completed [8].

In Brian’s dream, he faces east, toward the rising sun. In mine, he faces west, toward the setting sun, perhaps my sun. In his dream, the sun “takes on a strange appearance”. In mine, there is an unknown woman within the doorway of its light.

There are lots of bits that relate in smaller ways to myth which I have not looked at or not expressed in this post in the interest of brevity, yet I have included enough relevant material for the continuity of the series. The idea of the sense that death itself may be healing [9] might be looked at closer, for example.

[3] Analysis of a Dream Series

“This image contains the psychological root of the “heavenly wanderings of the soul”, an idea that is very old. It is an image of the wandering sun (fig. 3), which from its rising and setting travels over the world.”

[9] Michael Meade, The World Behind the World- The Return of Healing: