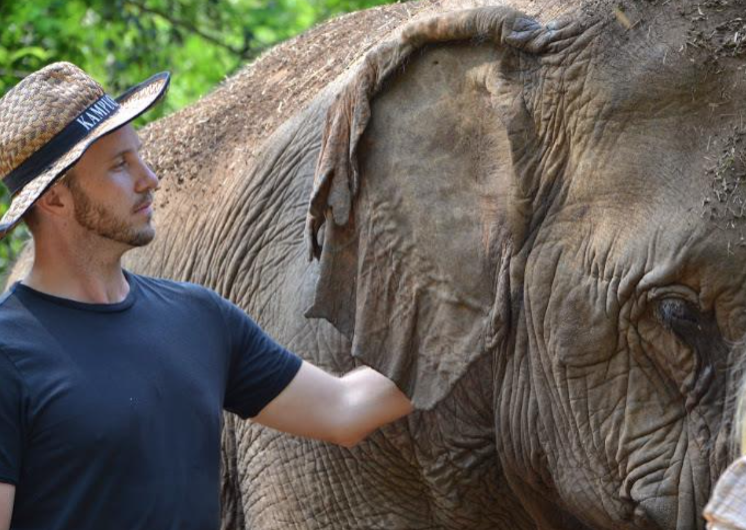 When Jonathan Erickson entered the M.A./Ph.D. program in Depth Psychology with a Specialization in Somatic Studies at Pacifica, he probably never imagined he would end up working with elephants in Cambodia as part of his curriculum. Admittedly, he has always been interested in highly intelligent animals, and he had encountered the Elephant Valley Project in Cambodia[1] during some prior travels in southeast Asia. Elephant Valley focuses on conservation and rehabilitation of elephants, maintaining a highly ethical stance. Eco-tourists who flock to the area are not allowed to ride the elephants, for instance, as the elephants are not there to serve humans, but rather to live their lives in peace, notes Jonathan. When it came time for Jonathan to conduct requisite summer fieldwork in the Somatics program, he found himself contemplating what it would be like to conduct his doctoral fieldwork in a sanctuary where elephants were treated with respect, and it seemed like a natural fit.

For Jonathan, one premise for the correlation between the work he was doing in the PhD specialization in Somatics at Pacifica and the work he proposed to do with elephants was to look at human-elephant relationships and human-elephant communications.

We know elephants don’t have abstract language the same way that we do, Jonathan asserts, so their ways of thinking, being, and communicating are obviously different than ours. What we do share, however, is that we are both embodied species: that is, we live out our lives as bodies, and we make contact and connections through our bodies. The question of what it means to be an embodied elephant appeared to be an interesting point of intersection between the two species, humans and elephants, Jonathan decided. It opens up avenues for approaching elephants through gesture, touch, and empathy—all embodied responses we relate to as humans by way of “gut feelings,” emotional resonance, or a sense of attunement. Jonathan was curious to see how those same ideas might be applied to another intelligent species.... (Read the full post or listen to the audio interview on Pacifica Post here)