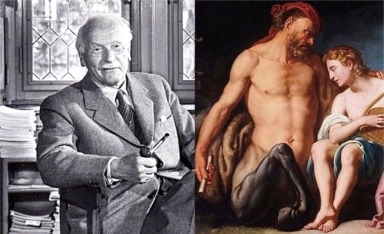 Jung and the Archetype of the Wounded Healer

“We could say, without too much exaggeration, that a good half of every treatment that probes at all deeply consists in the doctor’s examining himself, for only what he can put right in himself can he hope to put right in the patient. It is no loss, either, if he feels that the patient is hitting him, or even scoring off him: it is his own hurt that gives the measure of his power to heal. This, and nothing else, is the meaning of the Greek myth of the wounded physician” (Jung, 1982, par. 239).

When viewed through the lens of Jungian psychology, the figure of the wounded healer takes on profound significance for those in the helping professions. As an archetype of the collective unconscious, the wounded healer represents patterns of initiation and healing that become constellated (activated) whenever helper and client come together for the purpose of healing. These patterns rest on the ancient bedrock of evolutionary psychological development, creating an expectation in both helper and client that there is a way forward, and that the potential for healing lies within the wound itself. As Christine Downing (1990) has observed, “In the religious healing tradition of ancient Greece it was assumed that the god who can heal is the one responsible for the wounding in the first place,” and that “...ritual healing was based on homeopathic assumptions: the agent of wounding and healing are one. The Greeks also believed that the deities had themselves suffered whatever they might impose on others” (p. 555).

When Carl Jung spoke of his interest in the ancient patterns found in myth and legend, he was not simply regressing back to an older, obsolete way of thinking. He understood the gods of legend to represent the psychological patterns through which healing energies may flow, if they are treated with same respect that the ancients once accorded to the gods themselves. Of equal importance to Jung was how these patterns come into play in terms of what both he, and Freud before him, called the transference and countertransference. Transference may be understood as a type of projection that the client experiences through any individual who they expect will help them to heal. Often, this very projection on the part of the client constellates a similar type of projection (countertransference) which the helper may experience through their helping role with the client.

Jung was deeply concerned with his own psychological wounds, not simply for the purpose of his own well-being, but also for the well-being of his patients. As he has said,

“The therapist must at all times keep watch over himself, over the way he is reacting to his patient. For we do not react only with our consciousness. Also we must always be asking ourselves: How is our unconscious experiencing this situation? We must therefore observe our dreams, pay the closest attention and study ourselves just as carefully as we do the patient. Otherwise the entire treatment may go off the rails” (Jung, 2011, p. 133).

Jung’s concern was that the complexes of the therapist may unconsciously intrude themselves into the helping relationship, in the same way that the complexes of the client must also become activated by the relationship. The deeper the relationship delves into working with the client’s complexes, the more the archetypal realm of the psyche is constellated – in both the helper and the client. Having a knowledge of the ancient, archetypal patterns of healing and wounding can be of enormous help when navigating the healing and wounding energies that emerge in the helping relationship.

The history of humankind is rich with traditions of healing stories, from the shamans of indigenous peoples, to Chiron and Asclepius of the Greek traditions, Apis of the Egyptians, Ishtar and Marduk of the Babylonians, Airyaman of the Persians, and Diancecht of the Celts (Jayne, 1962). Not all of these figures were ‘wounded’ healers, some were themselves ‘wounding’ figures. However, each one contributes to our knowledge of how ancient humans – and the contemporary, unconscious psyche – understand wounding and healing.

Click here to register for the full, 8 week college-level course