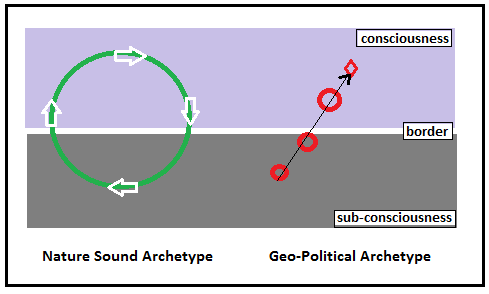 “According to Jungian approach of psychology, some highly developed elements of the collective unconscious are called ‘archetypes’. Carl Jung developed an understanding of archetypes as universal, archaic patterns and images that derive from the collective unconscious and are the psychic counterpart of instinct. They are autonomous and hidden forms which are transformed once they enter consciousness and are given particular expression by individuals and their cultures. Being unconscious, the existence of archetypes can only be deduced indirectly by examining behavior, images, art, myths, religions, or dreams. They are inherited potentials which are actualized when they enter consciousness as images or manifest in behavior on interaction with the outside world.”

The sound archetypes were imprinted in ancestor brains by the shamanistic rituals of chanting and dancing. We all carry remnants of these imprints in our genes and in our collective mind. Chanting and dancing still have powerful effects on humans. Kiirtan is a modern version of the sacred dances of the Paleolithic times. The Sufi dances are the same way. Rhythmic repetitions of certain sounds take us to our beginnings. Basically we are reaching the deeper layers of our brain, the parts of the brain that deal with raw emotions and even deeper layers, the so-called primitive brain where involuntary body functions are performed. The sound archetypes are to be found at this layer of the brain and in the corresponding layers of the mind which is the collective mind of our species.

My work has often been focused at the what I call the "conscious - unconscious border." See this piece as one example: “Pre-Mythic Symbols and Archetypes” - Biomimicry and the Hunters and Gatherers – Lecture Outline.” My gut tells me that fear especially resides here and that real change can occur here. My vision for new archetypes and Permaculture, Transition and the New Mythology lives in this border.” - Willi

+ Can start in the sub-consciousness but reside and quickly fade in consciousness
+ Passive - like watching TV
+ Add little to creativity and evolution
+ Power to judge, opinionate or separate

3. Sound Archetypes & Geo-Political Archetypes: Examples of Their Symbols and Expressions

Geo-Political Archetypes and their Symbols

Archetype: The hope to build sustainable systems in our local neighborhoods and towns
Symbols: Crude oil on rails, GMO; Convergence and sharing expo events; neighborhood plans and new rituals
Expression of archetype: Fear of food and fuel shortages; fights for resources between neighbors and governments

Agreeing with Campbell and his Creative Mythology, it is clear that artists can and do give us a “sense of the transcendent in a universe apparently empty of meaning.” Indeed, they share their symbols, initiations and journeys on our way to new archetypes and global change.

Archetypes are often spiritual and / or universal in how they affect human emotions and the arts.

The often symbiotic relationship between Permaculture and Nature and their symbols and archetypes is key to understanding current archetypes and welcoming new ones.
Computers and the internet accelerate global data sharing, symbol building and archetype testingbetween the collective conscious and collective unconscious.

Archetypes, symbols and new myths are one big ecosystem made of multiple critical paths and stories. One corrupted symbol, time worn myth or archetype can wreak havoc on the collective unconscious – collective conscious transmission.

“Sound Archetypes and the Four Seasons” – Children’s Video and Documentation