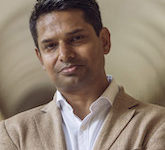 Psychiatrist, Philosopher, Writer, and Wine-Lover Neel Burton MD was born in 1978 in Curepipe, Mauritius to a Mauritian father and a Zanzibari mother, and grew up in Geneva, Switzerland. From 1996 to 2002, he studied medicine and neuroscience in London. He then moved to Paris, where he worked as a strategy consultant and, later, as an English teacher. In 2003, he returned to medicine and the UK, and, in 2004, went up to Oxford to specialize in psychiatry while simultaneously reading for a Master’s in philosophy in the University of London. He currently lives and teaches in Oxford, where he is a Fellow of Green-Templeton College. He is the recipient of the Society of Authors’ Richard Asher Prize, the British Medical Association’s Young Authors’ Award, the Medical Journalists’ Association Open Book Award, and a Best in the World Gourmand Award. His work has been translated into several languages, including Chinese, Japanese, German, Italian, and Portuguese.  The book he discusses here with Isabella Clarke is Growing From Depression.