If movies are suppose to move you, then I recommend seeing Melancholia. It is a difficult movie - having to suffer the antics of Justine whose pretense at her wedding collapses; she is tedious at times and at least one person, unable to bear it, left the theater. But, enduring Part 1 turns out to be a prelude to what will follow as the focus shifts to her sister Claire and their inevitable fate. Justine becomes a dark anti-hero who graciously leads the way to a crushing conclusion. I am not giving anything away here since the first ten minutes of the film - breathtaking, surrealistic, mythic stills - storyboard the entire narrative.

These stills and the acting alone are worth your time. The movie received mediocre reviews, but having read a few, this can be explained by reviewers and perhaps an audience that doesn't appreciate the raw, dark, mysterious, irrational nature of the unconscious. After a night having "slept" on this movie, I am still disturbed and even haunted by its apocalyptic, nihilistic vision. "The earth is evil," says Justine, upset me, as did other elements in the story (especially her brother-in-laws' cowardice). But, I have to remind myself that Lars von Trier succeeded in realizing one of those latent fears hidden in the unconscious: the inability to avert collision - the ultimate failed coniunctio. Justine cannot connect in her wedding, her persona melts like wax. She is on a collision course that materializes in physical reality; "I know things" she declares: her foreknowledge of what's to come; to her fiance, "what did you expect?" Going a step further, we might entertain the possibility that the wedding sequence is no more than a prophetic dream, followed by it unfolding in Part 2. 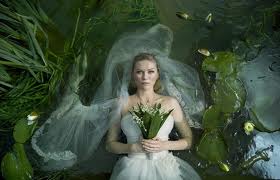 Melancholia, to be sure, is not a crowd-pleaser and far from a perfect film. And yet, I feel its necessity, the need to visualize our worst fears. After all, here I am attempting to write a review; an attempt at sharing an experience that left me moved and ironically unable to shake off the fate that awaits us all. In this, Justine gives me courage, comforts me. Perhaps you can relate, disagree, elaborate, inform, argue...anything but leaving me alone in melancholia.