"By most definitions at online sources, mythology is a technology. I call this hybrid phenomenon MythoTechnics as there are several important implications in tools and access now. Mythology as a technology? Where are the gadgets? The calibrations? The downloads?! Mythology has always placed a critical role in the evolution of human beings. 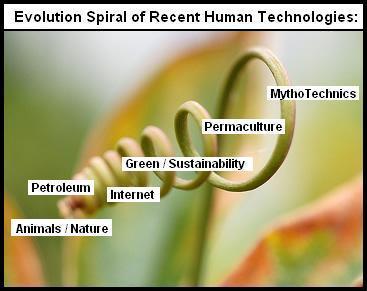 Through MythoTechnics, the wisdom of the stories, symbols and lessons of both ancient and modern myths can now must refreshed, accelerated, and permeated globally as a shifting and sacred force, a key global alchemic unifier or motherboard for the Transition of man with Nature now underway." WP (see http://planetshifter.com/node/1955)