We are pleased to announce that the new issue of Depth Insights™ Journal, the official peer-reviewed publication for Depth Psychology Alliance is out!

From the Editor, Bonnie Bright, Ph.D.: 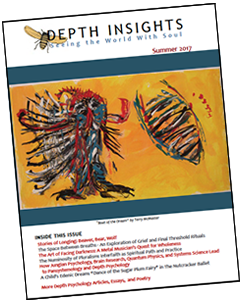 When the world seems to be falling apart all around us, depth psychology provides perspectives and tools that can help us make some sense of things, even in some small way. Through the study of the unconscious, we can often get a glimpse of patterns at work, or underlying aspects that help us gain a new understanding of how we are truly supported by something larger—how the boundaries and attachments of our ego selves can soften and give way to soul, which sustains us.
In this issue of Depth Insights, we encounter a variety of topics which, when we apply a depth psychological lens, we begin to understand at a deeper layer. Several of these seven compelling essays build on the authors’ personal experiences in order to truly explore the many ways soul reveals itself in our lives and in the collective. Others offer a broad academic view that integrate philosophy or systems science with depth psychology to further enrich the lens by which we might perceive soul at work in the world. ...

—Stories of Longing: Beaver, Bear, Wolf
—The Space Between Breaths - An Exploration of Grief and Final Threshold Rituals
—The Art of Facing Darkness: A Metal Musician’s Quest for Wholeness
—The Numinosity of Pluralism: Interfaith as Spiritual Path and Practice
—On Romanticism in Jung’s Psychology: A Reflection on The Passion of the Western Mind by Richard Tarnas
—How Jungian Psychology, Brain Research, Quantum Physics, and Systems Science Lead to Pansystemology and Depth Psychology
—A Child’s Edenic Dream: “Dance of the Sugar Plum Fairy” in The Nutcracker Ballet 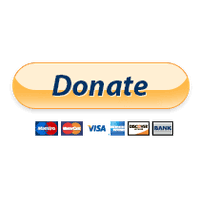 Each issue takes hundreds of hours of work as we strive to make depth psychology more accessible in the world.
The suggested donation is $10 for this issue.  Click here to offer a contribution of your choice in exchange for open access

CLAIM YOUR COPY of the latest issue HERE When I sat down recently with Thomas to discuss the topic of soul and spirituality, my first request was that he elaborate on the difference between spirit and soul. Moore’s understanding of the topic is rooted firmly in the past, going back to some of the earliest teachers of soul. While he explained his perception of the difference between spirit and soul in some detail, what struck me is that soul thrives on the “holy” and that there is a “non-human” dimension to it.

Most of the work Tom does is rooted in the spiritual traditions or in the depth psychology of both C. G. Jung and James Hillman. Both of these fields generally accept that there’s more going on within us and in the world around us that we can know, understand, or control. As an example, Tom points out that he did not “design” the life he has led, but rather has “discovered” it as he went along, trusting and having faith in life itself, even when he had no idea what was going to happen next. That for him is “not human,” because it is more than any human being can possibly understand.

While you may call one’s unfolding “destiny,” or “fate,” the language or metaphor or poetic language we engage to express the Mysterious is primarily about our feeling of its value and our great reverence toward it is what Thomas calls the “holy.” This describes Moore’s own sense of reverence for the Mysterious which has shaped his life.

In his most recent book, A Religion of One’s Own, Thomas shares some ways to tap back into a sense of spirituality. When the topic arose, I asked Thomas his opinion about the role of formal religion, which seems to be waning in our modern world.

Tom surmises that existing institutions, including religions, need to be re-imagined to suit our times. His definition of religion is a “creative and concrete response to the Mysteries.” Religion is not just an idea or belief, he insists, nor is it about perfecting ourselves. It’s about our relationship to the Mysterious “other.” Moore cites Henry David Thoreau and Ralph Waldo Emerson, nineteenth-century authors, poets and philosophers whose grasp of religion was, in the sense that Moore describes it, a “personal experience of the holy.” They designed their lives to be more contemplative, Moore suggests, in order to be in relationship to nature and to the mysterious things in life. Thomas also insists secular literature is holy, confirming that

he gets religious and spiritual guidance there. Traditional religions have changed in contemporary culture and are now “losing favor” because we are moving into a new world, he says.

Upon hearing this, I think of the alchemical adage that the the “old king” must die in order for alchemical transmutation to begin and so something new can take its place. We are seeing dynamic change in the world, and so much is in decline— not just religion, but also in the natural world and in social systems around the globe. Allowing ... (Click here to read the full post on PacificaPost.com)

“Generally people who are active in a religious faith tend to get through difficult times better,” says Al Siebert, Ph.D., author of The Resiliency Advantage. (Cox 2011) Many psychologists have reached the conclusion that people with high religious convictions and who participated in religious rituals/activities could overcome depression faster than their non-religious counterparts. In Jungian Analytical Psychology, dealing with the divine mystery of religion, is really to deal with the mystery of the unconscious. One might ask, what religion is best to aid a individual to top resilience and an meaning of life. This can be difficult to answer from an theological point of view, however Analytical psychology answers this from an neutral stand point that all religions lead one through the journey of life.  All forms of scripture, rituals and tales are all expressions of the collective and personal unconscious in each individual. Jung theorized that one could engage with the unconscious through dreams ,active imagination, and so doing could gain resilience that stays with us throughout our entire lives.

“Active Imagination is a therapeutic technique which allows unconscious contents to be exposed in a waking state…The images…may be elaborated through artistic and self-expressive mediums such as painting.”(Hyde&McGuinness 1992). This allows the unconscious contents that are built up just below the surface to erupt upon the Ego and be interpreted and dealt with in a conscious context. We can apply this experience that active imagination gives to a person’s psyche when they are connecting with the archetypes on a conscious level, when they are being creative, playing with others, and learning new things, regardless of the age they currently are.
Every time a person interacts with their psyche, either through active imagination, or dreams, they are interacting with the contents of their personal unconscious and the archetypes of the collective unconscious. This gives people that sense of continuous wonder, which directly contradicts the feeling of dullness and meaningless. This allows aging individuals the feeling that their life still has meaning, for life is not over when one reaches old age. According to Jung, it is the later part of life and the psyche is still very active and is still growing and changing on the path of individuation.(Jung 1960)

Individuation is the process by which a person has a total understanding of the totality of their psyche. Unconscious contents, both personal and collective are brought forth and dealt with by the Ego. This is a process of understanding the Self, the archetype of the entire psyche/Soul/The Divine Self Within. This understanding of the Self gives people a sense of wholeness and connection with everyone around them on a universal level. This is the driving force behind why people, as they become elderly, have a healthy and motivated life. They are experiencing new things and obtaining new knowledge because their inner life is being successfully balanced. When one has  understanding of their own psyche they have no problem following their bliss and going through life as happy, resilient persons.

I have often wondered at the efforts the western world has taken in its efforts to bring religion down to earth.  We have tried to abolish excessive ornamentation, the use of statues, and costumes that invoke spiritual imagery.  We have opted for common-sense plainness.  No frills and no idols and no distractions.  Just the words to cling to and even those are presented in the plainest language possible.  And out of all of this, one is supposed to “connect” with something that defies being contained by ordinary and plain words, defies being explained by common sense.

“”Exclusive appeals to faith are a hopeless petitio principii, for it is the manifest improbability of symbolical truth that prevents people from believing in it.  Instead of insisting so glibly on the necessity of faith, the theologians, it seems to me, should see what can be done to make this faith possible . . . .   And this can  only be achieved by reflecting how it came about in the first place that humanity needed the improbability of religious statements, and what it signifies when a totally different spiritual reality is superimposed on the sensuous and tangible actuality of this world.”  (Jung, CW 5, par. 336)

Looking at the actuality of the world, the places of grandeur, the places that invoke awe – this is where our spiritual roots are found.  It is within out attempts to use images and architecture that we have tried to “inspire” a sense of the spiritual, to create a sacred space, a place of temenos, that we have given birth to religions.  And all of this was done so that we can get a sense of the improbable, so that we can be taken outside of our prosaic simpleness to see the depths that dwell “within.”